According to the same study, 65% of US adults turned to digital channels to learn about candidates running for office, which make social media, mobile apps and other digital environments ripe for political advertising. Forty-eight percent of those surveyed said they relied on news websites and apps for information.

For millennials—the demographic instrumental in electing Barack Obama in 2008 and again in 2012, partly because of Obama’s strong online presence—the interest in digital content is even greater. For adults between the ages of 18 and 29, social media and news websites or apps were the top two routes for seeking information on the election. This is in stark contrast to other age groups, where cable TV news is still the top channel for information.

Calling TV a necessary evil, Matt Ross, advertising director at AOL’s Washington D.C. arm, said, “TV is the cannon, and that’s why advertisers are spending 80% to 90% of their budget on it. It’s how it’s [always] been done. But as time shifting and the fragmentation of media continues, data is one aspect that can help position digital.”

One segment that digital can target is undecided voters. A main goal of advertising is to persuade those who are on the fence about an issue or candidate, but zeroing in on this group through TV ads is virtually impossible. TV-viewer data with that level of specificity is just not available, according to Ross.

Better data is pulling digital channels ahead of television in terms of consumer preference, and will continue to do so as analytics tools continue to improve, Ross predicted. For candidates that want to reach those coveted undecided voters, especially young digital natives as they reach voting age, a digital strategy is a must-have.

Unlike television, the digital side of political advertising is rich with targeting, analytics and other data-driven tools. While TV is untrackable, digital is relatively easy to track.

Politics-specific audience-segmentation technology, for example, is becoming increasingly sophisticated, enabling candidates to slice and dice voters based on their campaign’s strategic needs. Companies like real-time analytics vendor Neustar offer targeting to suit a candidate’s needs. Neustar recently rolled out Political Audiences, a segmentation tool that groups households into 172 segments, which can then be combined based on demographic, geographic and issues voters care about.

A voter may be focused on the economy or may be concerned about education. “We have attributes that speak to those things, so we can roll those segments up into groups that all care about similar things,” said Lisa Joy Rosner, CMO at Neustar. “Those groups then become actionable because we find them through online media channels. That means a marketer could say, ‘I want to target Democrats who care about education,’ and buy segments that have been rolled up into that audience group to target them online.”

A November 2015 poll of US registered voters by the Interactive Advertising Bureau (IAB) found that 32% of respondents clicked on a political ad when they came across it on a digital channel, and 43% searched for more information about a candidate after seeing an ad. Substantial percentages even took the engagement a step further by sharing it with others, either through an in-person conversation (34%), on social media (28%) or in another online forum (20%).

For ads to really resonate, however, the medium through which they’re served has to resonate as well. Mobile devices represent only a small percentage of where voters see political ads, but the channel can be powerful, especially on Election Day. According to the same IAB survey, only 12% of voters had come across political ads on mobile websites, and even fewer had seen them on mobile apps.

This is a missed opportunity, according to Mike Balabanov, advertising account director at AOL’s Washington D.C. arm.

“The most personal device that voters have is a mobile phone,” Balabanov said. “They’re with it constantly. If advertisers can send the right message using the right data through a captivating video ad or interstitial ad that really speaks to voters, that can really change an opinion and be persuadable. It’s about the emotional connection that a user has to an ad on a phone.”

Mobile devices are critical for reaching key demographics, such as millennials and certain cultural groups. “If you look at Hispanics, our data suggests that those are the largest consumers of media through the smartphone,” said Jerry Hug, CEO of SITO Mobile, a targeted mobile messaging provider.

And on Election Day, smartphones are critical. “What do people do when they’re waiting in line to vote? They’re on their phones,” Hug said. 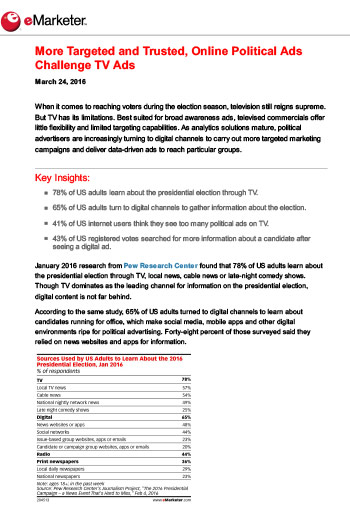