DDoS Ransom Attacks: Pay Or Else

When you hear “ransom attack” you probably think of ransomware – the malware that can encrypt or block files or entire systems until you pay the attacker to restore access.

But there’s been a massive surge in a virulent new type of ransom attack.

And the defenses you have established to fight ransomware won’t help defeat this new threat, because it doesn’t require malware.

Instead, the extortionists simply threaten to shut down your network with a massive Distributed Denial of Service (DDoS) attack at a specified day and time – unless you pay.

And they’ve done it, freezing the websites of major organizations around the world.

Read this white paper to learn: 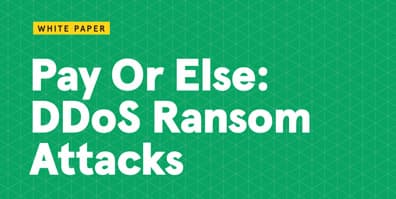 Thank you for downloading DDoS Ransom Attacks: Pay Or Else.