In 2020, U.S. consumers received over 49.5 billion robocalls, and 45% of those calls were scams. Findings from Omdia’s report, Rebuilding Trust in Calls, 2021 ―a survey of 100 large U.S. enterprises across twelve industries―show that while the impact of robocalls on consumers is significant, the impact on enterprises may be even greater.

The survey benchmarks the importance of phone calls to enterprises, and the impact of negative call experiences on answer rates, customer engagement, brand reputation, and revenues.

Phone calls still reign supreme for customer engagement.
In spite of the rise of social media, email, and messaging apps, phone calls remain a vital channel for enterprises to communicate with their customers. According to Omdia’s survey, fifty-four percent of respondents ranked phone calls as the most important means to reach their customers, and an additional 29% ranked it as very important.

This is most pronounced for the hospitality and travel industry, where 80% of respondents see phone calls as the most important channel, and another 10% as very important.

Regulators stepped in, but with unintended consequences for enterprises.
To address the growing issue of robocalls, in 2020, the Federal Communications Commission (FCC) allowed Communications Service Providers (CSPs) to block or stop suspicious calls as long as they could rationalize how they were doing so using reasonable analytics.

Then, the FCC mandated that CSPs deploy STIR/SHAKEN call authentication technology by June 2021 to verify that telephone numbers and related data have not been spoofed. These practices aim to protect consumers from illegal robocalls and provide them confidence that their Caller ID display labels are accurate. 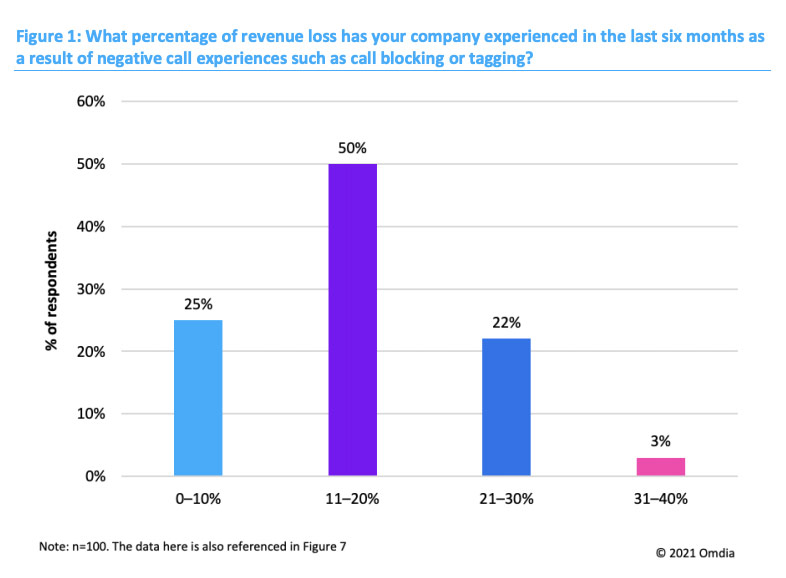 “This is arguably the most striking and important finding of the research, given both the level of negative financial impact that companies are reporting due to negative call experiences such as call blocking or tagging, and the fact that the level of revenue losses is increasing over time,” Mike Roberts, Analyst, Omdia.

As the impact of robocalls being inaccurately blocked or tagged as SPAM is now quantified in terms of revenue losses and increases in costs, enterprises must proactively address how they can rebuild trust in their calls and protect their brand and profitability.

Through a centralized platform, Neustar’s Branded Call Display (BCD) – part of our Trusted Call Solutions suite - lets you reassure customers it’s you calling by displaying your full name, business location, logos, e-business cards, social media links, and more, on the mobile display. At the same time, Neustar provides the STIR/SHAKEN component that verifies that the number, and the data, have not been spoofed

More vigilance needed during busiest shopping week of the year