The numbers are big-and getting bigger. Cybersecurity Ventures estimates that cybercrime will cost $6 trillion a year by 2021, compared to the $3 trillion lost to cybercrime in 2015.1

According to Javelin Strategy & Research, the number of identity fraud victims increased 8% in 2018. Not only are the number of cyber threats increasing, but fraudsters are working hard to discover new avenues of attack-and are getting better at covering their tracks. For example, Javelin notes that criminals are increasingly opening more new accounts as a means of compromising consumers' existing accounts.2

Banks and credit unions are feeling the pressure. According to a recent survey conducted by American Banker on behalf of Neustar, more than half of banks (56%) and credit unions (53%) say that their financial institution is more vulnerable to fraud compared to 12 months ago.

One reason fraud is increasing is that fraudsters have many of the tools they need to perpetrate cybercrime. With the Yahoo! breach affecting three billion consumer accounts and the Equifax breach of 145.5 million customers, plus others, personally identifiable information (PII) is readily available on not just the dark web, but also more visible parts of the internet.

Financial institutions are well aware that PII is easily hacked, with 41% of banks, credit unions, and non-bank lenders saying that name verification is the weakest security measure, followed by address verification and email verification, both at 35%, and landline phone verification at 24%.

Unlike static data-such as a name or Social Security number, which doesn't change, or credit bureau data, which relies on periodic consumer updates-dynamic data elements can't be spoofed and constantly give clues as to whether consumers are who they say they are. For example, the attributes of a mobile device are what they are. A phone is either active, or it isn't. It's prepaid, or it isn't. The device history, and whether or not the number has been diverted, are attributes specific to that device. Dynamic data isn't a silver bullet, but when used in combination with other types of data, it significantly increases fraud prevention and the ability to identify good customers.

Get this white paper to discover: 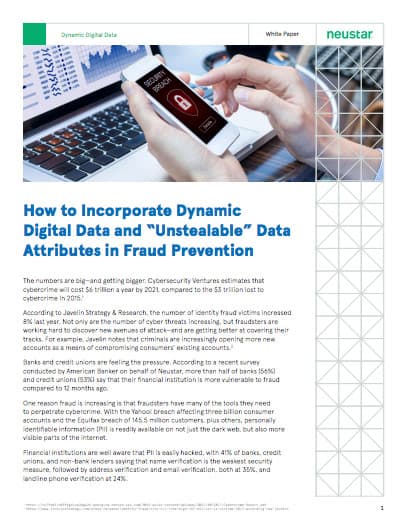