Companies are increasingly awash with numerous types of customer data from various sources. These data can provide insights giving brands the competitive edge to win, serve, and retain customers in a time when individuals have more information and choices available to them anytime, anywhere. But leveraging customer data isn’t an exact science. As consumers start to scrutinize the data that’s collected about them, including by whom it was collected and for what purpose, extracting value from this data without alienating customers is easier said than done.

In July 2014, Neustar commissioned Forrester Consulting to evaluate the growing tension between increasing consumer skepticism around data collection and use, and the established methods of capturing and applying customer data for marketing purposes. To further explore this trend, Forrester developed a hypothesis to test how much of a consumer’s relationship with a brand is based on trust, and how much of that relationship is predicated on whether brands have earned that trust in ways that extend beyond the basic ability to competently deliver goods and services.

In conducting an in-depth survey of 998 online consumers in the United States, Forrester found that businesses that exemplify integrity (defined as the commitment to transparent and honest business practices) in addition to competency (their ability to deliver goods and services in a way that meets customer expectations) are those that earn consumer trust. Furthermore, Forrester found that when it comes to customer data use, companies that fail to assess the appropriateness of different types of data in different contexts are particularly vulnerable to losing consumer trust.

This research is a follow-up to an earlier Thought Leadership Paper produced by Forrester Consulting on behalf of Neustar entitled, “Differentiate With Privacy-Led Marketing Practices,” which was published in July 2013.

Consumer Online Activity And Privacy Concerns Are Rising In Tandem

In the age of the customer — in which consumers have more choices and access to information as they evaluate which businesses to patronize — it is nothing short of essential for marketers to know what makes a customer tick. This requires continuously updated data from a variety of sources, as well as capabilities that adjust the applications of that data due to conditions that can turn on a dime (see Figure 1). At the same time, as we noted in our 2013 study on privacy-led marketing, Americans are rapidly adopting various practices and technologies in an attempt to protect personal data as they increasingly live their day-to- day lives online. Since that study, a strengthened economy and beefed-up eCommerce strategies have made it easier for consumers and businesses to interact digitally. Yet increased scrutiny of the customer data market and several high-profile data breaches have shaken consumer trust. Given these circumstances, we sought to understand how online consumer activity and personal data guardianship have evolved, and how that affects the move toward adaptive intelligence. The extent of change is surprising and suggests that companies have a lot of opportunity to communicate relevantly and personally to customers, but doing so without alienating them takes tact. Our study found that:

Earning Consumer Trust Is Hard, But Losing It Is Easy

With the increased scrutiny on personal data use and the steps taken by many to protect themselves against common modern marketing practices, it would appear that online consumers are losing trust in the companies with which they interact. We sought in our study to dissect this notion and determine which companies consumers trust, which they don’t, and why. More specifically, we wanted to find out whether consumer trust is more affected by competency — defined as the ability to consistently and effectively provide a product or service — or by integrity, which is defined as the commitment to transparent and honest business practices. We found that:

Consumers Value A Company’s Integrity Over Other Attributes

Companies tout response times, loyalty programs, customer service, and market share as evidence of commitment to customer centricity, but rarely do they highlight the integrity of their business practices. With business integrity ranked so low on marketing’s priority list, how much does integrity really matter to consumers? As it turns, out quite a lot:

Context Is Key When Using Customer Data With Integrity

Given the myriad customer data types and sources in use today, along with the diversity of marketing targets, it’s not enough to make assumptions about consumer perceptions without digging a little deeper. What constitutes data use with integrity, anyway? The answer is: It depends. In our survey, we randomly assigned respondents to one of six customer data application use scenarios to decipher differences in reactions among the population. Three industries — healthcare, telecom, and retail — were each assigned one scenario centered on behavioral data (e.g., transactional data, web browsing history, and location data) and another scenario centered on inferred data (e.g., analytically modeled attributes such as credit score, propensity, and personas). What we found solidifies the important notion that one size does not fit all when it comes to customer data use:

1. Forrester defines the “always addressable customer” as someone who owns and personally uses at least three connected devices, accesses the Internet multiple times per day, and goes online from multiple physical locations, at least one of which is “on the go.” Source: “The Always Addressable Customer,” Forrester Research, Inc., September 26, 2012.

2 Retail sales metrics reflect the increasingly mobile consumer population. In 2014, online retailers reported average growth for sales via tablets and smartphones at 86% and 113%, respectively, over the previous year, compared with an average eCommerce growth rate of 29%. Source: “The State Of Retailing Online: Key Metrics And Initiatives 2014,” Forrester Research, Inc., February 12, 2014. 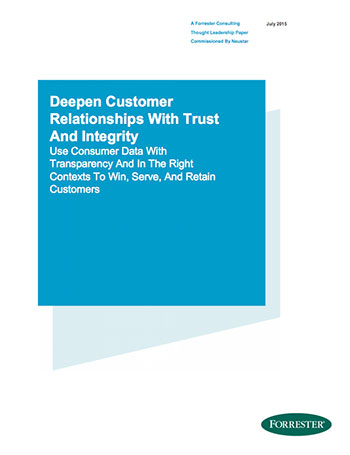 Webinar: Why Your First-party Data is NOT Enough | Neustar

Top 5 Questions to Ask Yourself When Managing Customer Data | Neustar