Paving the Way for Women in Tech

When Padma was a young chemical engineer at the turn of the century, she traveled to different parts of the U.S. and the world with her all-male team.

“It was often assumed in places we traveled that I was the general manager’s secretary and people would look to me for assistance. I was asked several times to pour tea during meetings,” says Padma.

She was helping design and implement chemical safety programs and systems. 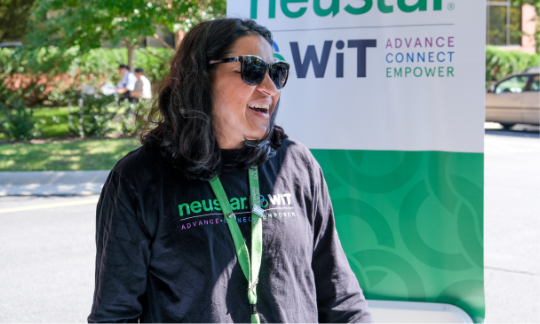 Padma’s path to leadership in the technology field started with a progressive male role model — her father who was a glass technologist and entrepreneur. He strongly supported her love for math, science, and reading — and encouraged her to do what made her happy.

This support motivated Padma to pursue a career in engineering. As one of only nine women in a 318-person class at the premier Indian Institute of Technology Madras, Padma quickly learned the concept of “working that much harder” in such a competitive, and male-dominated, environment.

Her career path was not linear, and she faced bias at several points in her journey. Oftentimes she wasn’t considered for positions that she was qualified — or even overqualified for — due to lack of sponsorship. Padma ascribes this partly to the power of the “male network.”

“Women didn’t and don’t as easily come by the ‘sponsors’ that men do. Working mothers have to return to the household quickly after work to tend to their family and caretaking duties. We aren’t as often afforded the opportunity to, say, golf with our colleagues or go out for drinks with our team. This leads to male-dominated networks. And people tended to, and still tend to, hire from within their networks,” she says.

For Padma, that pattern changed with Neustar.

Padma joined Neustar via the acquisition of a startup, NightFire Software. Initially a member of Neustar’s professional services team, she has since worn several hats, covering areas as diverse as strategic account management, product development, operations, and business intelligence.

Now, Padma is the vice president of Enterprise Services at Neustar, leading a portfolio that includes IT engineering, global technology services, and enterprise business services.

In addition to her daily work, Padma is extremely active in Neustar’s diversity, equity, and inclusion efforts. Her goal? To build networks of powerful women in the technology sector — something she’s sponsored at Neustar through the Women in Technology program. WiT works to lift up and celebrate the amazing women technologists within Neustar, generating opportunities for advancement and recognition.

“It’s essential that we as women create our own power in our own networks and pay it forward for the next generation. We have to support each other and lift each other up. We have to create pathways for other women to continue rising through the ranks. The Women in Technology program was designed to do exactly that — build community, foster innovation, and establish a network of strong, smart women who support other women at Neustar,” says Padma.

She attributes her happiness at work to the opportunity for cool work and the strong network of male and female allies she’s gained at Neustar. One of her most rewarding experiences was building out Neustar’s Business Intelligence portfolio to provide actionable insights for products across multiple business areas. She also oversaw the company’s recent technology modernization, a complex project with scope, budget, and timeline overruns.

“I haven’t done the same thing at Neustar for three years in a row, and I love that,” says Padma. “Every year, I get to do something different and learn a new skill. But I am also able to leverage what I know about Neustar’s business to bring a different perspective to the table.”

She credits her bosses, both men, for recognizing her ability to deliver and make decisions when promoting her to this newest management position, a role Padma said she had limited background in.

“It was a leap of faith, but they saw my potential and acted on it.”

While companies like Neustar are paving the way for a female-friendly technology world, women who want to be successful in the field must still be proactive, says Padma. What’s worked for her? Being bold and getting out of her comfort zone at work to engage with others.

“I used to think if I just put my head down and did my job, I’d get recognized. But I realized I needed to do more — to connect with people in the lunchroom, to talk to them about what I was doing, and to learn more about what they were doing.

“Make sure people are hearing your stories,” she says. “I’m very driven to impact the next generation. And I’m very proud to be part of a mentoring culture at Neustar.”

While corporate technology roles are surging and increasingly vital in the United States and globally, women are falling behind in the field.

“Because of the lack of diversity and recruiting challenges, it’s especially important for companies to challenge, mentor, and champion women in tech positions. Neustar is leading the way in this effort, and it’s one of the many reasons I’m proud to work here,” says Padma.

“We can’t just focus on how to get women to ‘break the glass ceiling’ in technology,” she says. “It’s critical to fix the barriers to attracting and keeping them in the field. We know from our research that women, particularly in the technology sector, often feel invisible at work or don’t feel supported in their culture. And so we’ve shifted our emphasis to hire, promote, and support women in tech at the entry and managerial level. We’ve also worked hard to create and cultivate a workplace environment in which women feel more empowered and engaged.”

Carey says women who have taken time off to raise a family, for example, are also often disadvantaged in the hiring process. Neustar has focused more on hiring women for technology positions based on their future potential, not solely on their credentials.

“We’ve worked hard to create a benefits package and provide the support women need to integrate work and other aspects of life in the way that works best for them,” says Carey. “Neustar is already above average in our women to men ratio for the information technology industry, and our goal is to leave that average in the dust.”

Offering more flexible work options, a comprehensive mental health program with paid mental health days off, a caregiver support center, adoption assistance, tuition reimbursement, and the opportunity to work on high-visibility projects has been fundamental to creating a more inclusive culture for women at Neustar.

“When my kids were younger and I needed to have a more flexible schedule, I was afforded that opportunity. I did not have to choose between my career and my kids, and for that I am truly grateful. Now that my kids are older, I am able to do more at work and in the community, and I’m active in helping build a diverse and inclusive workforce at Neustar,” says Padma.

6 Reasons to Work for a Company that Seeks Change