Olympics Sponsorship Efficacy: It Hurts Not Being a Player

During the 2008 Beijing Olympics, we worked with a major US TV network to build a model that measures the effect of Olympic advertising (media) and sponsorship synergies on advertisers’ revenue. The model also looked at the effect on non-Olympic advertisers. The results were very interesting for brands. 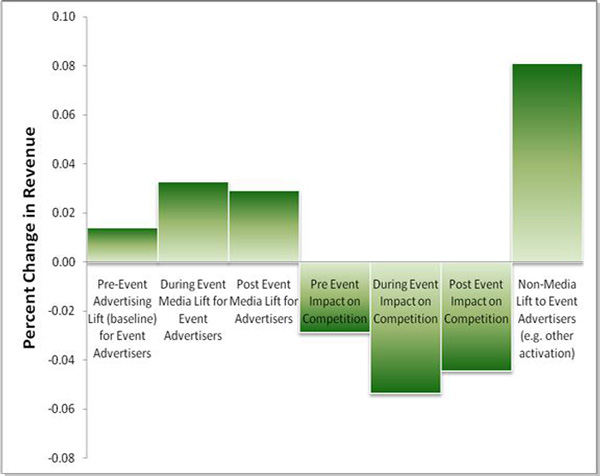 We established the baseline period as the 2 week pre-event period when the event advertisers spent on media. There was a noticeable lift here and nearly double the negative impact on competitors who did not advertise.

Both of those figures more than doubled in the 2-week event period, with advertisers seeing twice the lift compared to the baseline period, with competitors being impacted even more.

In the 6 month post-event period, the lift generated for the event advertiser remains high, very similar to the lift experienced during the event period. We see a similar impact on the competition, indicating that failing to advertise actually caused a bigger drop than the gain from advertising.

Moreover, advertisers saw a significant increase (almost 4 times that of the lift experienced through event advertising alone) in activation outside of the event sponsorship, through other channels such as search and television.

This is extremely important, as it shows the importance of measuring return on channels outside of the specific event. Event sponsorship increased the ROI of non-event related advertising in an extremely significant way. If you were measuring event sponsorship ROI alone, you may be missing out on a big piece of the puzzle.

We have seen very similar responses to advertising and sponsorship in studies we have done for other international sporting events and across a variety of brands.

These findings reflect a rather large incentive for companies to advertise during major worldwide events, such as the Olympics. The Olympics, like other major sporting events, commands huge advertising dollars. However, when considering the size and types of companies that are sponsoring these events, the payoff is significant.

Where is Attribution Headed in 2015? (Video)

Does the “Decline of Print” Include Magazines? (Research)