If you work in network security, you never want to get a message like this. Unfortunately, more and more security teams are receiving them; one of our clients got this one. And even though it says “don’t worry” right there in the third paragraph, you can be sure they were alarmed.

This explicit threat is part of a significant and disturbing trend in cybercrime: a rising tide of attacks that threaten to paralyze an organization’s digital assets through a cripplingly large DDoS (Distributed Denial of Service) attack unless the victim pays a significant ransom to the crooks. 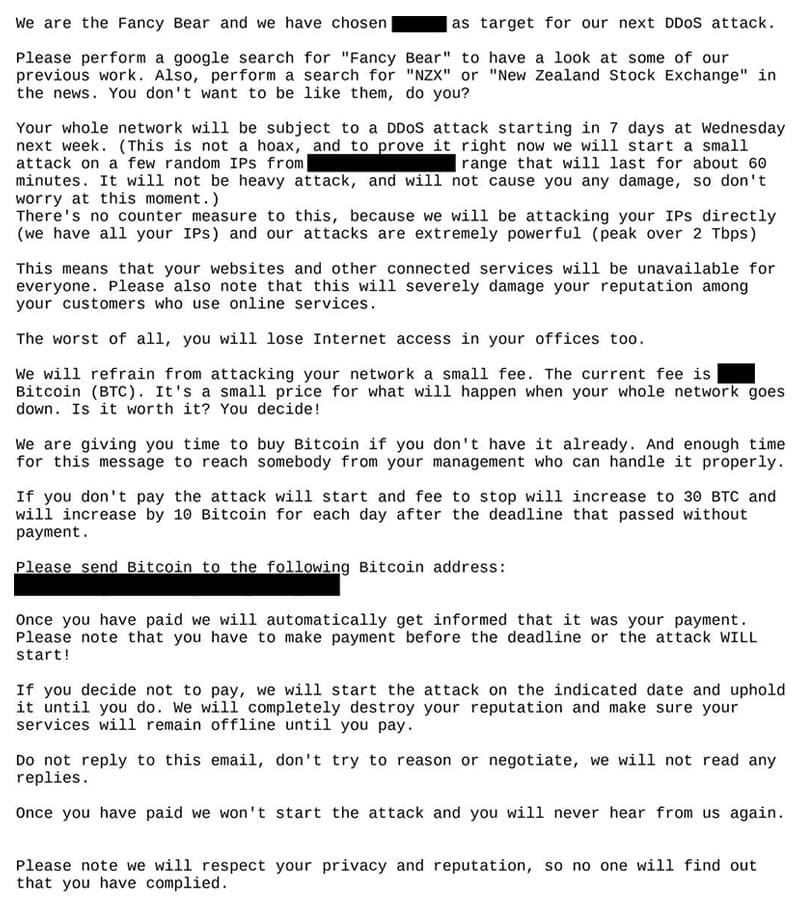 This note includes the most common hallmarks of this growing cyber threat:

These kinds of attacks aren’t new. The first threats date back to around 2003, primarily targeting online gaming companies. However, the number and pace of attacks has risen sharply in the last few months and many industries are now targeted. The spike is significant enough to have prompted a flash warning from the FBI. The technique has become so prevalent it has even earned its own acronym: RDDoS (sometimes RDoS) for Ransom Distributed Denial of Service.

Based on insights from our own Security Operations Center as well as industry reporting, here are the most important facts you need to know about these attacks:

As with all cybercrime, these threats will most likely continue to evolve, not only in the messages that are used in the ransom notes but also in the techniques that are threatened and actually used.

What should you do if you’re attacked? First, don’t panic – and don’t pay. That’s not just our recommendation; that’s the FBI’s recommendation as well. Paying is only likely to land you on a list of companies that capitulate, and may well attract future threats.

Instead, the FBI suggests contacting their nearest field office if your organization is threatened. The information you provide may help prevent future attacks, and could help identify the attackers.

They also recommend using a DDoS mitigation service, such as Neustar UltraDDoS Protect, that can automatically identify and block attacks.

If you are a Neustar UltraDDoS Protect customer, your infrastructure will be protected, even if the extortionists do mount the threatened 2 Tb/sec attack. Our global data scrubbing network has the capacity to handle more than 5 times that volume of attack traffic.

If you have questions or concerns about your capacity to mitigate DDoS attacks of any size, or would simply like to discuss your security concerns with a knowledgeable professional, take a moment to request an email contact from one of our security experts.