In case you missed the press release, Neustar recently joined the Streaming Video Alliance (SVA) as co-chair of the Geo Working Group. I wanted to provide an update and a little background information now that Neustar has finished up participating in our first conference.

Neustar was chosen to join the Geo Working Group given our IP Intelligence (IPI) decisioning data solutions. Our current IPI products have evolved during the last eight years from the acquisition of Quova in November 2010.

Neustar IP GeoPoint is the database that maps IPv4 and IPv6 addresses to geographic attributes, network ownership, and other contextual information. Neustar also publishes IP Reputation scores that map an IP address and provide a Real User Score, which differentiates real end-user (human) traffic from non-human (server or bot) traffic. It also provides a Risk Score, which offers insight about the risk of the IP address.

IP GeoPoint is often used for geofencing access, which is applicable to many streaming video services that need to enforce content rights restrictions. Streaming platforms, like BAMTECH, have restrictive licensing agreements with content providers, such as Major League Baseball (MLB), and use IP GeoPoint data to comply with contractual obligations.

The Geo Working Group has been working on a specification for the data interchange of IPv6 address attributes like its geography or network ownership. It’s an interesting project and something that would be absolutely necessary if the industry is ready to openly exchange this information. The project has been a little slow in getting steady momentum moving forward, but that’s likely due to the fact that many members have yet to fully embrace the value.

Some carriers may never want to share their IPv6 announcements, as this could be considered a security risk. Plus, there is less value to the early adopters sharing their information when the network effect has not yet reached critical mass. It will require them to dedicate some engineering resources and doesn’t immediately add any customer-facing features. 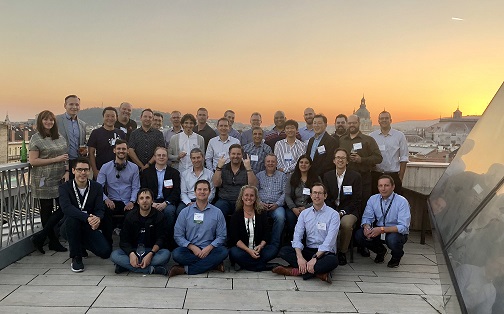 Several members of the Streaming Video Alliance on the rooftop of the IBM Budapest Lab.

During the conference, one of our fellow co-chairs of the Geo Working Group presented an interesting idea around proxy identification or anonymizer detection. To the general audience of the alliance, this initiative seems like it’s going to generate much more interest and be more applicable to their business operations.

Moving forward, here are some of the things I’d like Neustar to contribute to this initiative.

Proxies or anonymizers allow the user to remain anonymous or to mislead the remote web server about the actual location of the client. At Neustar, the term “Anonymous Proxy” is mostly used, but you may also hear “VPN”, and in this context it implies the same idea.

Many times, proxies/VPNs are necessary tools. For instance, journalism is a dangerous job in many parts of the world and Tor is often recommended. However, many others use the same services to circumvent legitimate content restrictions put in place by OTT providers, subject to their licensing agreements.

Upon discussing the goal of the Proxy paper, it was suggested to start simple and go with something like a jazzed-up data glossary. The reader of the paper needs to understand the terminology, the technology, and the problem before they’ll be interested in the more technical aspects, like how to identify proxied traffic.

Given the diversity (OSI 3 – 7) of the proxies/anonymizers/VPNs, a document like this probably needs a lot of illustrations and links to Wikipedia to make it most effective.

For instance, the Neustar data schema identifies if the connection is an anonymizer, but it also categorizes using the additional attributes: proxy_type and proxy_level. These are useful if more granular handling of the proxy traffic is required. For instance, some applications want to treat SOCKS traffic different than HTTP proxied traffic.

Tor is probably the best known of the anonymizers, but there are also commercial services available that allow you to choose a location (country) as the source of your request, subverting detection, and proxying the traffic back to you, the client.

There is a lot of great content that we could produce just in trying to understand the many technologies working in conjunction with each other.

After two days of presentations, focusing on everything from encoding and decoding techniques to transport protocols, I realized I need to gain a better understanding around the current technology behind video streaming.

However, it’s easy to see that membership in the SVA provides the distinct advantage of gaining access to valuable industry insights that isn’t made generally available to the public. It also offers invaluable insights into the fundamentals of other high-performing organizations, which can be the foundation for better implementation of similar protocols or requirements when the need arises.

The next step is to create some useful content and add it to the industry discussion, hoping it gains traction and spurs action during our next Geo Working Group meeting.

2018 PACE Washington Summit: Who Wins in the Battle of Legitimate Call vs. Illegal Robocall?