Does the “Decline of Print” Include Magazines? (Research)

by Nick Stoltz and Aaron Slotnick

When marketers talk about changing times for print media, it’s important to realize that not all print categories have fared the same in recent years.

That’s one of the key findings in MarketShare’s multi-year ongoing cross-industry analysis of advertising spend,  focused on a $30 billion segment of North American client marketing budgets. The goal of that analysis is to get a clear picture of marketing trends amongst the world’s largest brands (the typical MarketShare client). The data have been both completely “blinded” and are reported in aggregate— which means researchers have no way to correlate information back to any single client, or to know the exact set of clients included in the analysis.

Recently, we narrowed in on the question of how print media budgets have fared over the past several years. To find out, we examined changes in average year-over-year spend for newspapers and magazines across the numerous clients included in our study, and compared them to the fluctuations we see in advertising spend overall. We looked at the years 2010 – 2013 (we haven’t used 2014 as the 2014 data set is still incomplete.)

What we found was surprising given typical narratives surrounding print media: newspapers and magazines seem to be taking very different paths. While spend patterns varied widely from client to client, on average newspaper spend shrank over the three years examined, while magazine spending has held strong. You can see that clearly from the following charts: 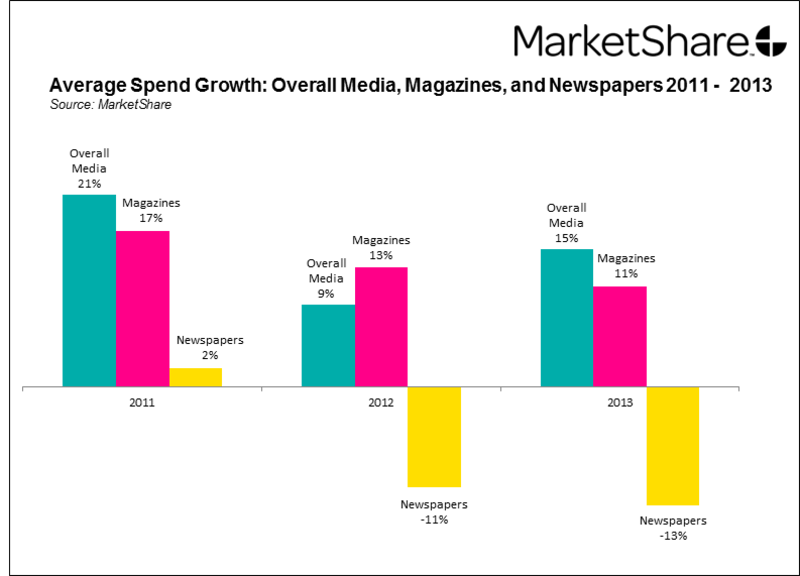 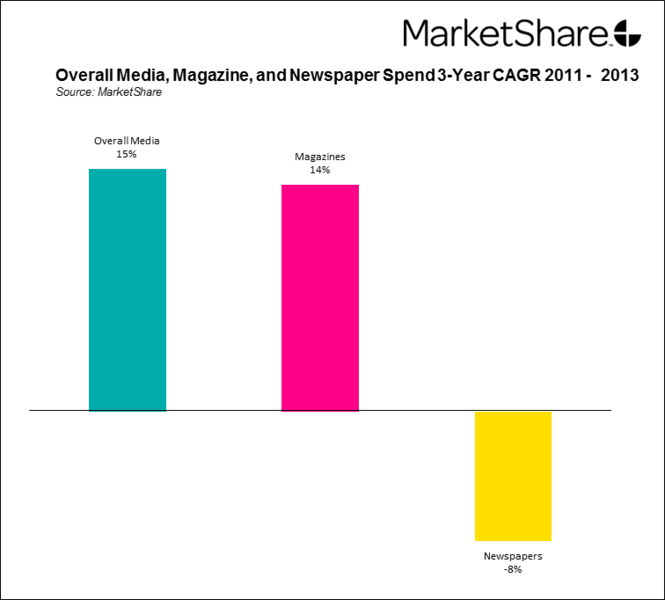 There are many possible reasons why print and newspaper spend patterns have diverged over recent years—and the specific, tactical reason will often vary from one brand to the next.   However, one emerging theme is that, for many advertisers, newspapers—home to coupons, classified ads, circulars and the like— serve as a “lower funnel” or call to action medium. Magazines, by comparison, more often serve as broader awareness and branding vehicles (they’re glossy, in color and stay in the home far longer than daily newspapers do). Marketers may feel that data-rich digital media has offered a more effective substitute for direct response marketing efforts, and so have shifted much of their direct marketing spend out of newspapers in favor of online marketing media. By contrast, these marketers feel that magazines still “work” as an effective vehicle for awareness and brand-building, and have kept their existing magazine budgets largely intact.

Whatever the reason, it seems that many marketers don’t look at “print” as a unified medium—and are adjusting their spend patterns accordingly.

Analysis: To Drive Ticket Sales for Action Films, How Should Studios Allocate Their Marketing?